None of this could have happened, of course, without the personnel working long, hard hours at the Lockheed Burbank assembly plant.

Check out these amazing pictures of the line workers doing their honorable work. 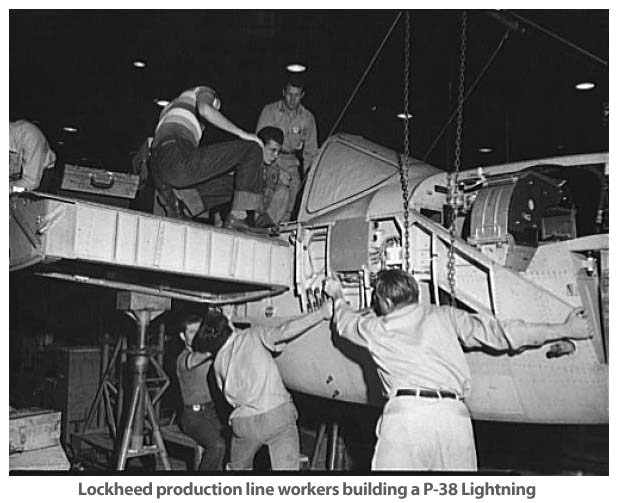 Here is a clever poem written by them and dedicated to the enemy.

AN ODE TO THE AXIS
FROM LOCKHEED WORKERS

When you hear a whistle in the sky
And see those twin tails streaking by,
You know that you have one less chance
Of ever making an advance.

When you started this war in thirty-nine,
There was no P-38 assembly line.
When you bombed Pearl Harbor in forty-one
That assembly had just begun.

When that line really began to move
You knew that we were in the groove.
When they first hit Africa in forty-two,
You began to think that you were through.

Now we are turning them out faster and faster
The sooner to bring you disaster.
Every one that leaves the assembly line
Helps to shorten your allotted time.

We use them for the camera ship
Because their speed gives you the slip,
And when the photographs they take,
Our bombers follow in their wake.

They escort bombers far and wide,
And on every mission tan your hide.
From the rooftops to the stratosphere,
Of all your planes they are the peer.

The Zero, it was sure well named,
For when the Lightnings’ guns are aimed,
The pilot gives them one quick burst,
There’s nothing there, the Zeros cursed.

Over in Europe it’s just the same,
Focke-Wulfs and Messerschmitts are fair game.
Our pilots chase them from the sky
And make of Goebbels’ boasts a lie.

For every time their five guns roar,
The Axis rats die by the score.
Fork’tailed terrors of the air,
They make our enemies despair.