Jack Ilfrey has been described this way: “Jack Ilfrey is a real-life cross between Hans Solo and Indiana Jones. Of course, Jack pre-dates those fictional characters by more that 35 years. Flying P‑38 Lightnings and the P‑51 Mustang, Jack was involved in events that would leave theme trembling like a mouse.”

Read a little about him and you’ll realize why we couldn’t really figure out his rank at any given time.  Wotta guy!

Jack entered the Army Air Corp as an Aviation Cadet in April,I941 and graduated at Luke Field, Arizona in the first wartime class (12 DEC 41). He was assigned to the 94th Pursuit Squadron, 1st Pursuit Group, flying the P‑38 Ds and Es in defense of the Southern California coastline.

In the spring of 1942, the 1st Fighter Group (as they were now designated,) were equipped with new P‑38 and were ordered to Dow Field, Maine, to prepare for the “Bolero Mission” — the first mass flight of fighter planes and bombers to England. “We called it the Guinea Pig Mission, cause that is what we were.” Ilfrey said. On July 4, 1942, the 94th. “Hat In The Ring” squadron took off on the first leg of the mission, from Presque Isle, Maine to Goose Bay, Labrador. Four P‑38 were assigned to each of the 97th Bombardment Group B-17s that joined them on the mission. On July 6th, the second leg was flown from Goose Bay to Reykjavik, Iceland. It was on this leg of the mission that six of the P‑38 and two B‑17s ran low on fuel and were forced to land on an ice cap in Greenland. While all of the crewmen survived, all eight aircraft had to be abandoned. Later dubbed the “Lost Squadron,” many expeditions were formed to recover these craft, and in the summer of 1992, one of the P-38s was removed from beneath its 270 foot tomb of ice, and later dubbed “Glacier Girl.”

On July 26th., most of the 94th FS (including Ilfrey,) landed at Kirton, in Lindsey, Lincolnshire, England. They were stationed there with the Polish 303rd Koscuisko Squadron, who taught them many of the tricks of the trade. On September 1 the 1st FG made the first all-American fighter sweep over northern France from Beurnmouth, on the English Channel’s coast. This was also the first mission of the US 8th Air Force against the enemy.

Ilfrey was known as “Happy Jack” for his cheerful disposition, and his ground crews in England nicknamed each of his planes “Happy Jack’s Go Buggy”

Many other missions would soon follow. On November 15 the group took off from Chivenor, in the Lands End area of England, on “Operation Torch,” the invasion of North Africa. It was not long before they all discovered what war in the air was all about.

It was during this mission that the first of many noteworthy happenings in Ilfrey’s career occurred. Shortly after take off, Ilfrey lost a belly tank, which meant he would not have enough fuel to complete the mission. He calculated that he had enough to make an emergency landing in Gibraltor, but his calculations proved incorrect and he was forced to make an emergency landing in a very German friendly Portugal.

Immediately upon landing he was informed that, as the country was neutral, all pilots and aircraft from outside countries that landed there would be interned. Jack escaped internment by tricking the local military authorities into refueling his P-38F. Once that was accomplished, he offered to show them how to start the engines. With Portuguese officers still kneeling on the wings, Jack firewalled the throttles and pulled the canopy closed as his hapless captors were blown off like leaves. Without the time to taxi to a runway, Ilfrey takes off straight ahead. He then navigated to Gibraltar by compass alone. The diplomatic flap caused by Jack’s bold escape results in the State Department demanding that he be sent back! General Jimmy Doolittle would have none of that, and he stepped in and smoothed things out for Jack.

The action continued when, on the following day, he damaged another Bf-109 over Bizerte Harbor. He received a commendation for his actions from the Chief of Staff, US Army, on February 3, 1943. After a total of 5-1/2 air to air victories, 2 confirmed damaged enemy aircraft, 208 combat hours and 72 missions, Jack was relieved of combat duty and reassigned to the states as a flight instructor in P-38s and P-47 Thunderbolts. 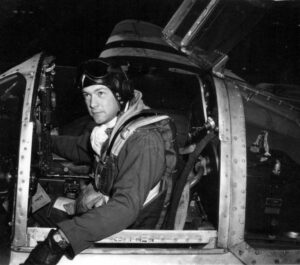 On June 13 after successfully dive bombing a railway bridge over the Loire River near Angers, Jack was shot down while strafing a train near there — some 200 miles below the front lines. He evaded capture and was back in England in 4 days.

It was along this time that Maj. Ilfrey was busted to 2nd Lt. for infractions of the rules, but was left in command of the 79th Sq. His claim to fame (or infamy) is that he was probably the only 2nd Lt. CO of a Combat Fighter Squadron during the war — at least for a few days — until he started his promotional climb back. He was again saved by Gen. Doolittle C.O. 8th A.F. at the persuasion of Col. Cy Wilson (20th Grp. C.O.)

The last memorable incident to happen was on 20 Nov 44 when he landed behind enemy lines, near the front, around Maastrick, Holland, and successfully picked up his wing man for a short ride to Brussels. After 70 missions and 320 hours of combat flyingJack was reassigned to the States, where he became a Troop Commander at McChord AFB.

In two tours, he completed a total of 142 missions with 528 combat hours.

Known as a fearless pilot, in 1944 Ilfrey was posted as Squadron Commander of the 79th Fighter Squadron of the 20th Fighter Group (the famous “Loco Busters”). Read about them here. 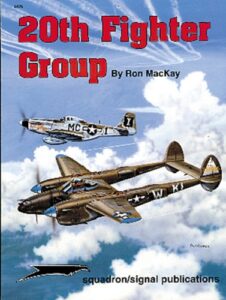 Follow the WWII exploits of the 20th Fighter Group, flying their P-38 Lightnings and P-51 Mustangs over Europe. You’ll read of such famous aces as Jack Ilfrey in his P-38 “Happy Jack’s Go Buggy” and Jim Morris in his “‘Til We Meet Again.” But you’ll also read of the less famous yet equally brave men who went about their task day by day, month by month. A wonderful look at what one typical Group experienced during the war. There are 200 B&W photos, 32 color profiles and more. 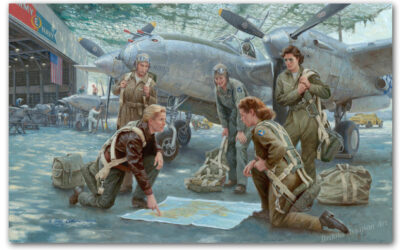