There are dozens of books available about the Lockheed P-38 Lightning. We have chosen a few that are unique to show you here, but if you’d like to see all the ones that Amazon has to offer, check these out!

Leora’s Letters: The Story of Love and Loss for an Iowa Family During World War II

The day the second atomic bomb was dropped, Clabe and Leora Wilson’s postman brought a telegram to their acreage near Perry, Iowa. One son was already in the U.S. Navy before Pearl Harbor had been attacked. Four more sons worked with their father, tenant farmers near Minburn until, one by one, all five sons were serving their country in the military.

Amazon Review: ” Through a well-crafted combination of letters, photographs, and narratives, Joy Neal Kidney draws you in and makes you feel like a member of the family. I found myself caught up in the daily experiences of all five young men and hoping each of them made it home safely. Unfortunately, war is never that kind.”

Perfect for anyone interested in history, Harry’s War describes the 30th PRS history, from formation, through training and action, to final demobilization, as well as its “everyman” soldiers, like Runyan himself, who gave up safety, security, and loved ones to fight for what they believed in. 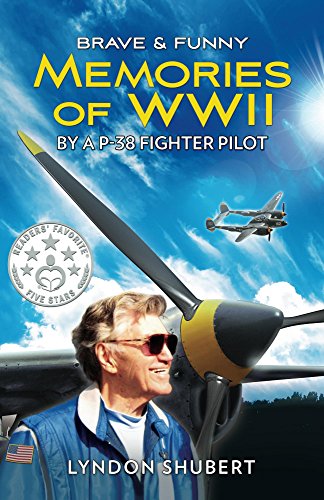 BRAVE AND FUNNY MEMORIES OF WWII: By a P‑38 Fighter Pilot

“I have to say that this was a really good read. I sat down to find out what Lynn had to say about his memories as a Lightning pilot and didn’t get up until I had finished the whole book. He has a light and humorous touch and such great stories. Behind the fun, however is an honest appreciation of the risks that he took and the fact that he was pretty scared flying the Lightning alone at high altitude, over the Alps, blazing the trail for a following bomber force and – as he puts it – he was expendable and he knew it.” –Amazon Review

Written by P-38 Association member and Museum Docent, American Headhunter is based upon a true story, the untold account of P-38 pilot Kenneth Lloyd Sr. in WWII air combat in New Guinea, Dutch East Indies, and the Philippines. The story captures the amazing transition of a young boy into a man to become one of the “greatest generations.”

Written by our own Life Member, Dick Butler, this book is a detailed account of the life of his father, Richard Butler, with emphasis on his 24‑year military career as a USAF officer.

In North Africa in 1943 Butler was assigned to fly the P-38 Lightning. Over southern Italy on Richard’s fiftieth and final combat mission, one of his enemy target’s plane disintegrated during a head-on dog fight. Before he could pull away, part of the wreckage disabled his left engine, which soon burst into flame, forcing him to bail out. Richard was taken captive and spent 21 months as a prisoner of war.

This book has been read and raved about by several members of the P‑38 Association. It’s an excellent, and significant read. You should definitely pick up your own copy today.

A compilations of the 4-view color profile, scale plans and photo details of the single variant of the Lockheed P-38L-5-LO Lightning.

Scale plans in 1/72 and 1/48 scales plus drawings from wartime technical manuals. Also photos of the details in B&W and color.

More than Just a Store

When you buy something from one of these P‑38 Association affiliate stores you are helping our non‑profit, veteran’s organization to keep alive the memory of this magnificent WWII fighter plane. It fought in every theater of operation during World War II and, without this extraordinary combat weapon things may have turned out very differently.

So, you can thank the P‑38 and the men and women who designed, built, maintained and flew it for helping to preserve the freedom that we still enjoy to this day. You can support our mission by making any purchases through one of the store links listed below! And we thank you for helping us continue our mission to keep the P‑38s flying into the future, as they did in the past.

NOTICE: The P-38 National Association is a participant in the Amazon Services Associates Program, an affiliate advertising program designed to provide a means for sites to earn advertising fees by advertising and linking to Amazon.com